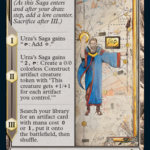 Modern is the most popular eternal competitive format in Magic: The Gathering that attracts players to tabletop events and Magic Online. The upcoming set Modern Horizons 2 is created with Modern in mind, designing new cards specifically for the format.

The original Modern Horizons in 2019 had a major impact on the format, even leading to several bans due to power-level concerns. Despite the introduction of a handful of overpowered cards, Modern Horizons accomplished the goal to create a dynamic Limited format and introduce playable cards into the high-powered format.

Modern Horizons 2 is continuing the trend of unique card designs that couldn’t be printed in a Standard-legal set, but are ideal for Modern. On today’s Weekly MTG stream on Twitch, Wizards of the Coast previewed three cards from Modern Horizons that exemplify the unique design space the set can explore.

Urza’s Saga is a showcase of the experimental design that was present in the original Modern Horizons and appears to be a part of the sequel, too. Urza’s Saga is the first-ever Land Saga and creates unique lines of play.

Urza’s Saga can create colorless mana for the three turns its on the battlefield. The second chapter creates an Artifact creature that’s also created by Urza, Lord High Artificer or Karn, Scion of Urza. When the third chapter resolves, Urza’s Saga is sacrificed, but it allows you to find an artifact that costs zero or one generic mana. Some options that can be found are Mox Amber and Tormod’s Crypt.

Brainstone is an artifact variation of Modern staple Brainstorm. Brainstone is one mana Artifact that can be sacrificed for two mana to get a Brainstorm effect. This Artifact is an underpowered Brainstorm that requires an investment of two more mana.

Colorless decks and non-Blue strategies could use Brainstone. It is a way for other strategies to get the same effect, but part of what makes Brainstorm great is its one-mana cost. This should be a solid card in Modern Horizons 2, but won’t make a huge impact on Modern.

Diamond Lion could see play since the ability is coming with a decent body, which is better than Brainstone coming in as a do-nothing Artifact.

We strive to produce competitive media products that meet the needs of readers and advertisers, to make the company profitable, and to meet the expectations of the owners and employees of the publishing house.
The mission of is based on two main strategies shared by each employee: continuous professional growth and compliance with the standards of quality journalism

The third-largest diamond ever mined on Earth found, worth $55…

Husband confesses to killing British wife in crime that shocked…

Diamonds, Ferrari and Crypto Alternatives: Investments in the…

MP’s Buxwaha region may lose over 200,000 trees to diamond mine

Chaim Bloom boosted Red Sox’ roster with diamonds in the…

Proposed addition to notable bank building will get…

Texas Republicans take aim at history this Juneteenth. It…

Thank you for subscribing.

We respect your privacy and take protecting it seriously